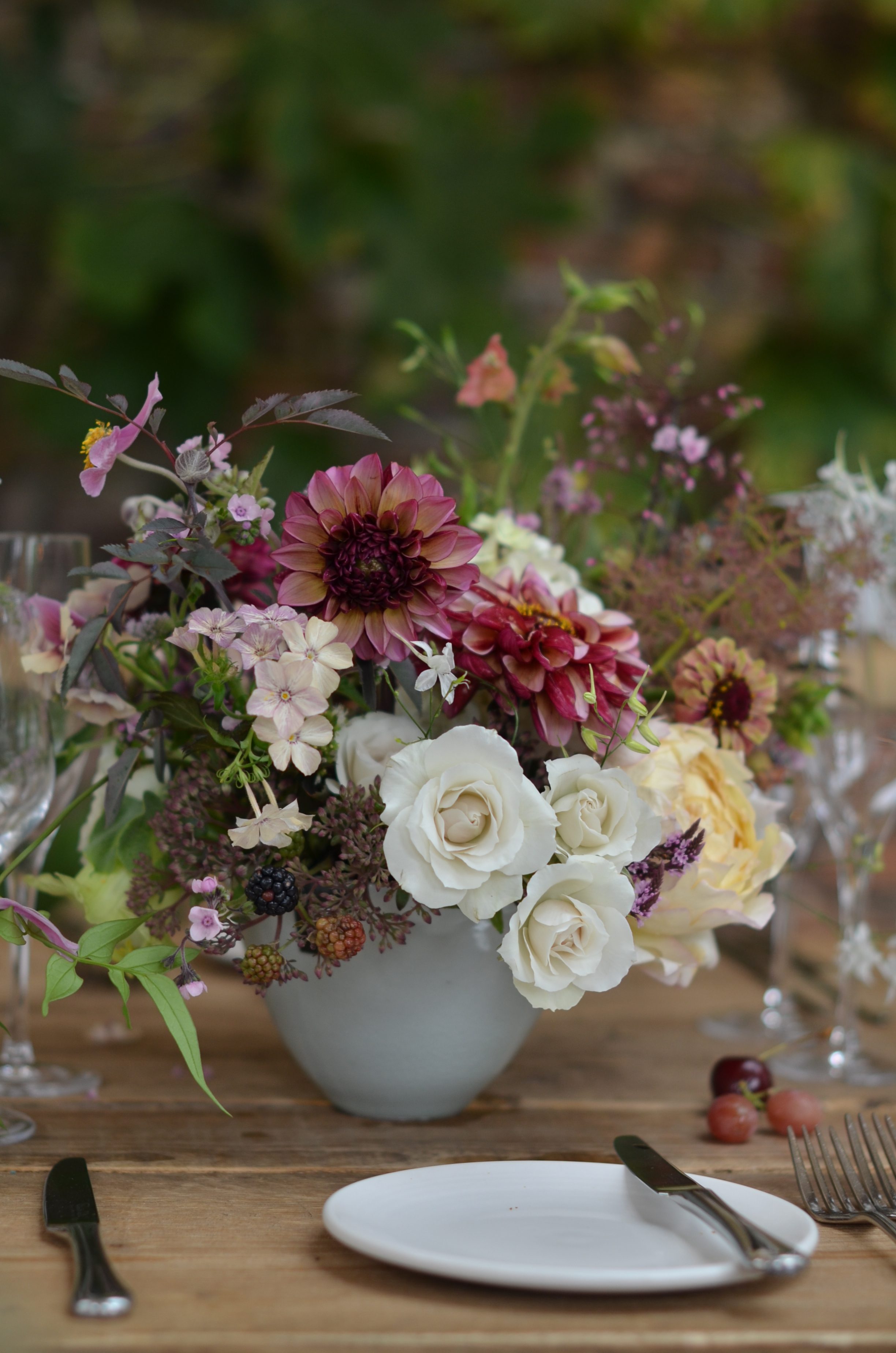 British Flowers, Bronte Tales and the Long Hot Summer of 2018

What a scorcher……screamed every newspaper. I don’t mind telling you, there were plenty of times when you could hear me scream too – when huge boxes of Margaret Merrill roses had to be thrown away on delivery because they just couldn’t stand the heat, or when, at 11pm, I was still watering the garden and everyone I spoke to mentioned an imminent hose pipe ban. Oh yes, whilst for some last Summer was the best for many a year, for the humble grower/florist it was, let’s say, quite a challenge. But, we live in Yorkshire, we’ve weathered floods, we are more than up to most challenges. And, now I’m further away, in the cool of spring, planning for the summer of 2019, I suppose I can look back and see just what an amazing summer it really was. Oh, and as my neighbour Brierley reminded me yesterday, it was also an extremely good year for plums.

As the plums began to ripen, June took us all by surprise. Hotter than ever, surrounded by the sweet familiar scent of Philadelphus, we began the wedding season drooling over Koko Loco roses and panicking over the vase life of poppies. 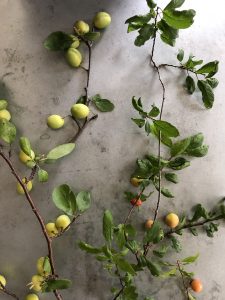 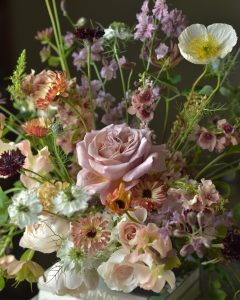 We had a few visitors from abroad and all of them saw Yorkshire at its best – huge blue skies, fluffy white clouds and everyone with the gentle glow that an overdose of Vitamin D provides. Molly the dog would say it was the best of times. A constant stream of friendly flower fettlers, all feeding her ice cream and endless days lying on the lawn followed by long evening walks when the paths were cool enough for paws. Off came the coats, abandoned for a good 3 months, and draughtier dresses with pockets big enough for scissors and all dog accoutrements had to be found. Some of the younger members of the Simply team took to wearing very short skirts (or, as Charlotte terms them, ‘seasonally proportionate’), and on some weddings there were lots of offers of help on floral chandeliers from passing groomsmen. Roger quickly offered up the use of his dark woodshed as a flower cooling area and, now I think more about it, I suspect the constant wafting by of women with buckets might have been better than the tennis. 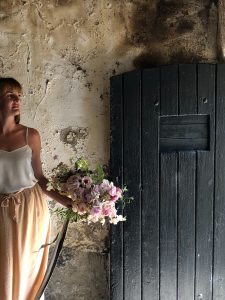 One of the things we do take for granted living here is space. Living on a hillside surrounded by fields of sheep isn’t something we give much thought to (unless, like now, it’s spring and you stand for hours watching lambs racing) but we had visitors from South Korea who were mesmerised and, when they explained about the construction of their cities, I began to see life in the small corner with fresh eyes. To breathe air that is pure and to have space in which to grow flowers isn’t something universal. I shall never forget meeting Jinny and her mum, so full of grace and so excited about sheep and ancient crumbling barns. Perhaps the old woodshed door doesn’t need replacing just yet after all. 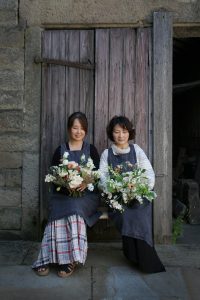 In the week that saw the bicentenary celebrations of Emily Bronte’s birth we were visited by Daisy, Soomin and Hari, who happen to love flowers and the works of those three sisters who wrote great books and poems at a Parsonage not far from here. Together with our friend Bronte Country Walks, we enjoyed another week of wall-to-wall sunshine. Sleeping each night at Ponden Hall, they were given the full Bronte experience, one of them staying in the very room that is said to have inspired Emily Bronte to write the bit where Catherine Earnshaw’s ghost rattled the window. We drank tonnes of tea, ate at several fine local inns (marvelling at the size of the average pork chop), wandered the moors in search of waterfalls and a fairy cave, cried at Emily’s poems read aloud amongst the heather and did lots of flowers. When some of those flowers later appeared in rooms inside The Bronte Parsonage Museum there were more tears – of joy. Behind the scenes, as the heat began to worsen, there was talk on the news of moorland fires and droughts. On the last afternoon (and after they had raided all the antique shops of Hebden Bridge, bags heavy with brass candlesticks and old books), we drank more tea in China cups in a favourite local cafe, and laughed a lot and they told me about how when doing the flowers it doesn’t matter if you all don’t actually speak the same language because with flowers it’s more of a spiritual way of learning, As I waved them off on the train back to London, the heavens opened, it poured it down with the most welcome rain, and I dare say that was a poetic, maybe even a spiritual, moment. Afterwards Soomin wrote to say “I miss the wind, the sun, the flowers, which I keep in my heart and of course the people the most”. I didn’t show this to Molly the dog. 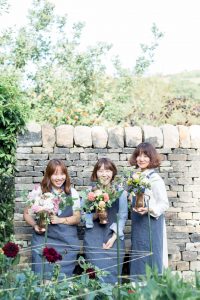 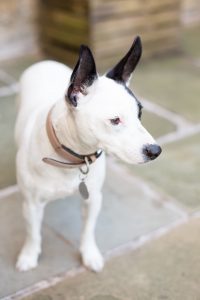 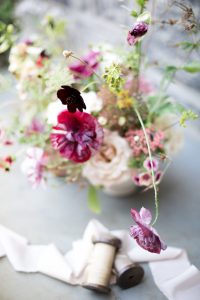 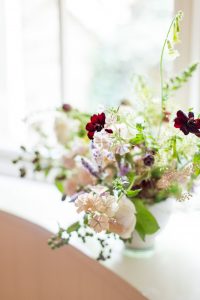 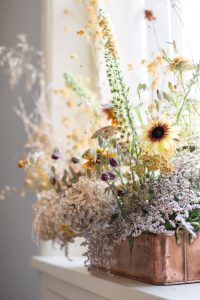 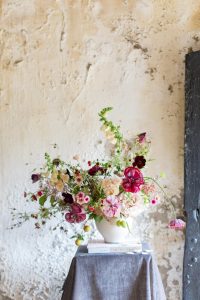 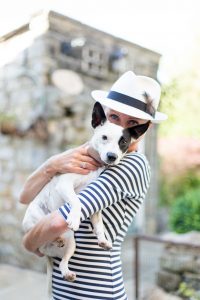 (Above photos by Helen Warner Photography)

In the one week of cloud and rain, we took a brief holiday in Dorset, capturing castles, because English Heritage allows dogs and not many other places do. By then (August) the Rudbeckia Sahara’s were putting on a better performance than the plums. I had more than even I knew what to do with, so, I packed them into everything I made, and I even packed up some to take on holiday. One of my favourite things to do on holiday is to find new light in which to take photographs and one bowl of Saharas saw several windowsills that week. 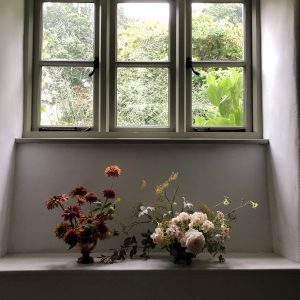 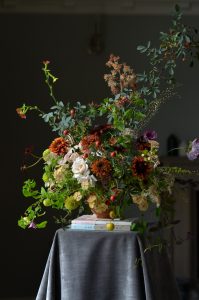 As August continued, the heat returned, no grass grew, the talk moved from hosepipe bans to the lack of water for household consumption, baths were forbidden and I couldn’t look at a garden rose without its petals falling off. There really were times when flowers died so quickly in the workshop that I felt I was on a hiding to nothing – it would have been easier to burn ten pound notes. None of our brides and grooms would have known this, because you don’t let them see wilting flowers, you just keep buying/picking back ups. I did eventually decide to make bridal bouquets slightly less delicately than I might prefer. And, where garden roses might be unhelpful in extreme temperatures, dahlias are surprisingly robust. At long last the hundred dahlias that Mr Simply complains about every year saved the day, as did some show stopping Cafe au Laits grown by a mother of the groom. 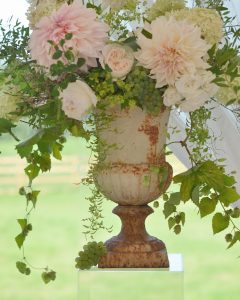 In a wedding class we ran with Hedgerow, we bravely tackled the outdoor, foam-free archway (carefully seating our guests under a parasol). Eventually common sense prevailed and we used an abundance of potted plants, grasses and dried ‘elements’, all the while thinking ‘this is how it must be if you live in the South of France’. Abandoning all hopes of being able to satisfy every bride’s desire for English garden roses in their summer wedding, I confess that I became a devotee of the Quicksand rose, a rose which will withstand anything. This of course means that I can no longer say we used all British flowers all summer, and whilst that makes me sad it meant I got through one of the most difficult summers a florist could ever have. Massive thanks must also go to Mrs B, Charlotte, Caroline, Holly, Louise, Lucy and Rachel for keeping me on the straight and narrow, and of course to Roger for his woodshed. 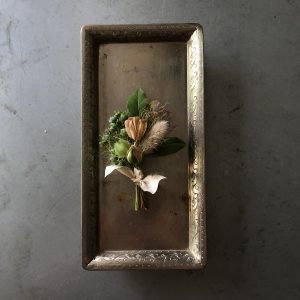 If you would like to experience a Yorkshire summer, then this July there is Simply Yorkshire – Summer in the Small Corner. This is a three-day retreat from 15th-18th July in which 3 guests can sample life here, from flowers, food and wine to small classes with the artists and makers of Hebden Bridge, with local walks and gardens too. The weather, is as yet undetermined….. 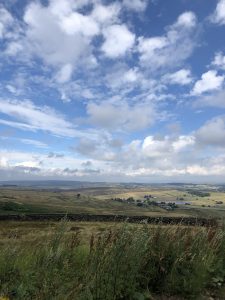