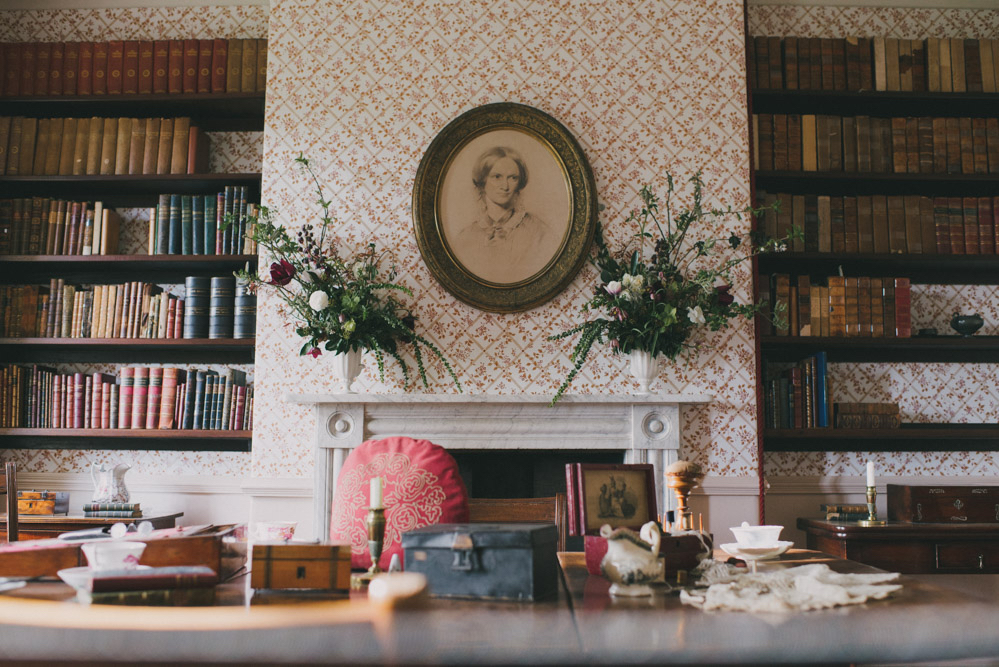 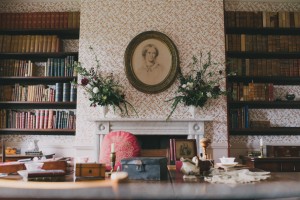 ‘Do what you love’ is a message we hear often, and working with flowers and food lets us do just that. But, this year we decided we would take things a little further and try to bring into our workshops other things we love.

It’s no secret that we like to use British flowers whenever we can. We love their uniqueness and, more than that, we enjoy working closely with the people who grow them too. It adds a whole new dimension to every arrangement we make if we know where each flower has come from. Often we’ve watched them being picked. We know that the growers have selected them for us because they think we will like a particular colour or shape. Sometimes, if we’re lucky, the grower might have grown them just for us. We know how much love and care goes into the life cycle of every flower. But we can’t use them all of the time – sometimes there aren’t enough. Maybe one day there will be….

Another thing we love is books. ‘Reader, I married him’ is a phrase often used around here since I am actually Mrs Reader (well, when we go in holiday). Like millions of others, Jane Eyre was the first ‘proper’ book I read as a child and, like every other reader, I kid myself that we are similar – strong-willed, tough and with a real dislike of unfairness. Trips to the Bronte Parsonage were frequent, and it’s a place where I feel very much at home. And so, when we were asked if we would like to fill Yorkshire’s finest museum with flowers for the 200th birthday celebrations of Charlotte Bronte, Mrs B had to pick me up off the floor. In my book it doesn’t get any better than that! 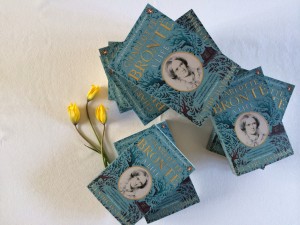 It seemed only right to share this honour around a little and we decided that a workshop held across the way in the Old School Rooms (the place where Charlotte taught and held her wedding reception) would be entirely appropriate. Mrs B pronounced the kitchen large enough to work in and the oven had knobs big enough to get to grips with so ‘that was that’. April 20th was a day of ‘doing the flowers’ for Charlotte’s birthday.

April is a tricky month – it rains a lot. Would we have enough British flowers? Would anyone want to come all the way to deepest Haworth? Well, the sun shone brightly for days, we had more flowers than could fill a church stage and people came – from as far as Scotland. One of our guests came for a week’s holiday.

The day couldn’t have been more perfect. A quiet dawn, unusually empty streets as we arrived with buckets full of flowers, polished vessels, trunks of Mrs B’s food and crockery and, of course, urns – for flowers and for Yorkshire tea. Gradually our guests made it in, some of them growers of flowers, laden with baskets and buckets and huge tulips bigger than their faces. We were delighted to have Chloe Plester from The British Flower Collective as a special guest and Paula Baxter (Millpond Flower Farm) not only brought masses of flowers but made each guest some special heirloom silk ribbon in a deep grey Charlotte Bronte colour. Claire Clarke (Peartree House Flowers) and Elizabeth Jackson (Flowers From the Garden) brought all the Yorkshire-grown flowers. More flowers from Cheshire grower Carol Siddorn and Flowers from Clowance completed our collection; all carefully colour coded by Holly in some posh buckets.

We flitted in and out of the museum, dodging tourists, each of us responsible for ‘flowering up’ a particular room using vessels from my own precious collection, polished and buffed especially for the occasion. There was singing – mainly from Mrs B in the kitchen. Rather profoundly she kept offering us “two soups” from behind her ‘hatch’ and we were all dumbfounded later in the day when the sad and untimely passing of the late and very great Victoria Wood was announced. If you haven’t heard her Bronte Parsonage tour guide sketch you have missed a treat.

Lunch was moved outside due the sunshine and we all basked, banqueted and removed our bolero jackets! Journalists came to see what we were doing – we went on Swedish radio and Look North – tourists ventured inside to see the flowers and a lady from Portland, Oregon who talks to Charlotte Bronte every day sampled Mrs B’s fruit loaf. 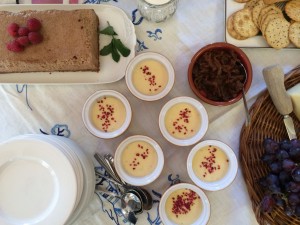 As the church clock struck 4 and the coaches departed we began to move our ‘installations’ into the museum. Lydia (Rose and Ammi) drew much attention as we hauled her huge landing windowsill masterpiece up the cobbled street. We both breathed a sigh of relief when a 6 foot branch of amelanchier fitted the window perfectly and I definitely heard gasps of approval from the staff in The Bronte Museum. 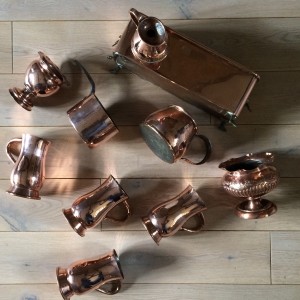 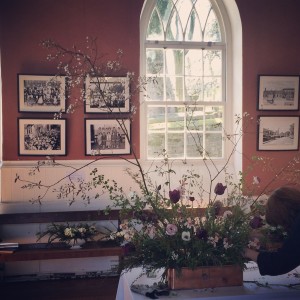 Urns adorned the mantle in the writing room – possibly my proudest moment as they were made by Elizabeth and Lindsay, who are often guests in our workshops; not ‘professional’ florists as such, but very talented. Copper vessels were on every possible surface in the kitchen, cascading with hellebores and ranunculus – and Elizabeth and Claire enjoyed their day ‘below stairs’. Mr Nicholls’ study is a small room with a window that cries out for flowers and Sue’s carefully chosen flowers ‘reaching for the light’ was hugely admired. Paula and Chloe took charge of all bedroom flowers and their wild yet delicate urns and bowls of flowers, in my humble and worthless opinion, would have been approved of by the great Constance Spry. A more bright and modern arrangement by Holly fitted perfectly into the contemporary area downstairs.

As each arrangement went into place the house came alive. All of us were a little emotional, and although I missed it myself I’m told that the curator had tears in her eyes as she lifted some of them into place. I am certain that Charlotte would have approved.

In fact, I know Charlotte did approve because the following morning as the sun rose again over the church tower, I returned with photographer Sarah Mason, who wanted to capture each arrangement in the best possible light. As the blinds in Mr Bronte’s study were raised, a tiny shaft of sunlight hit a hellebore, and, at that moment all of us in the room felt the approval. I like to think it was Charlotte’s approval, but maybe it was Mr Bronte’s approval that at last someone had bothered to do him some flowers! 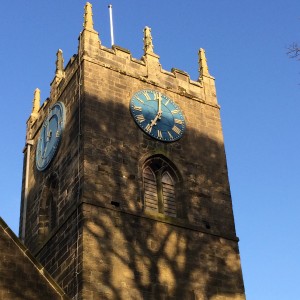 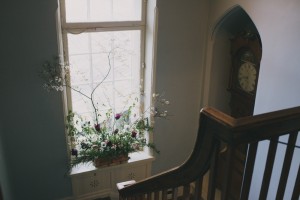 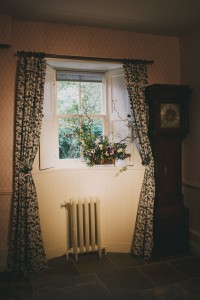 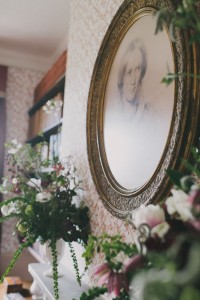 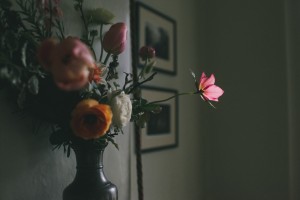 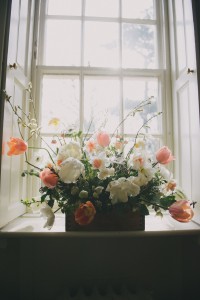 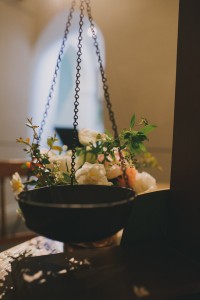 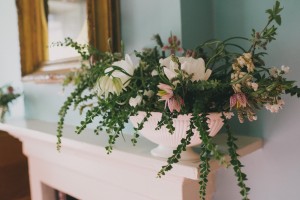 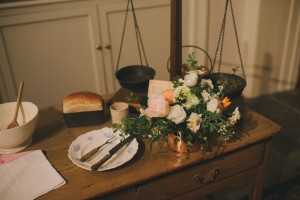 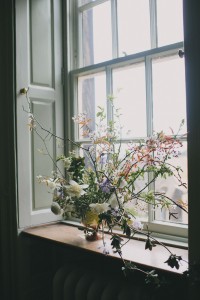 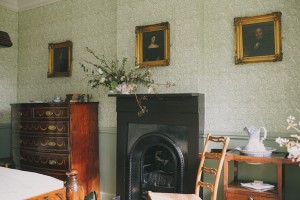 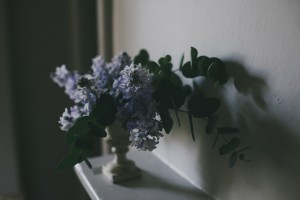 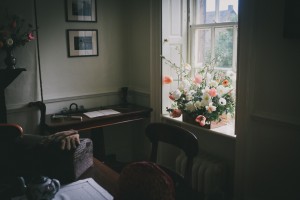 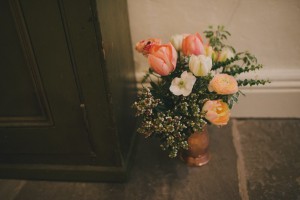