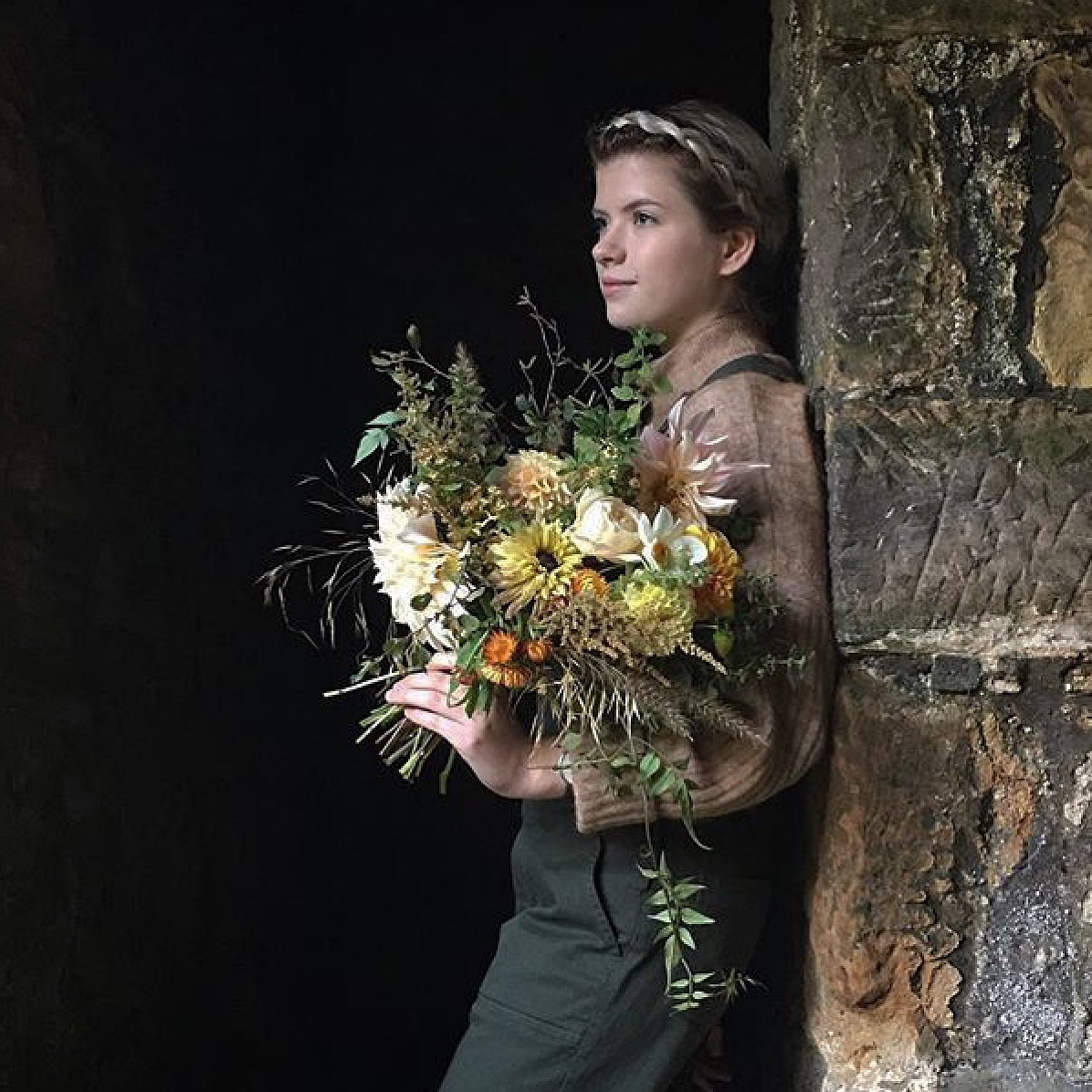 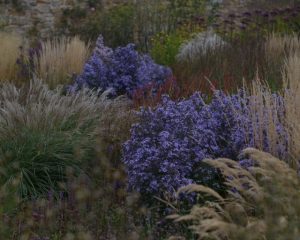 “You have to go to Cambo; you’ll love it”. I heard this phrase a lot, from people who knew what they were talking about. Serendipitously, the main three were to feature heavily in what proved to be one of the most magical trips of my life.

“Will you come to Cambo and do a class?” -a request from Christin Geall, or Cultivated by Christin as I really knew her then, since our relationship was one of those formed across the pond via Instagram. “I’ve never been. I can’t agree to do a class somewhere I’ve never seen”, was my first thought. Then came the voice of reason from Rachael Scott aka Hedgerow (who I already knew in the real life and who is possessed of very sound judgement). “It’ll be fine, you can’t do anything but fall in love with the place”. And that, as they say, was that. The plan was made, the advert went out and – much to my surprise – the bookings started to come in from around the world, and even from some of our previous guests too. That, for me, was added pressure. We were doing a 3 day retreat and we had some of our lovely customers/friends coming, as well as people who were travelling thousands of miles.

One of my usual fears – in fact I’ll be honest, my main fear – when organising any class is flowers. Will there be enough? Will everyone be happy with what we have provided? Will they like the colours, the shapes? Will there be that perfect piece of foliage with which to start, or just the right vine? Weirdly, flowers were the only thing I didn’t worry about on this trip; Rachael was in charge and that felt great. If Rachael is in charge you can sit back and relax safe in the knowledge that she has Paula Baxter actually growing special flowers in a separate poly tunnel at nearby Millpond Flower Farm, that she has a back up plan via The Real Flower Company for roses, and that she knows a man called The Edinburgh Flower Farmer who grows huge quantities of the sturdiest Rudbeckia Saharas. Add to all of that the fact that we would be working in the middle of one of Scotland’s finest gardens, with huge perennial borders and acres of woodland, and you can sleep easily. 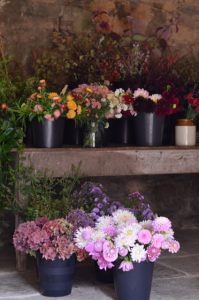 So, my only real worry was for the place itself. Would it match the high expectations we had given our guests via the enticing adverts and photographs? Christin had spent a while at Cambo as ‘florist in residence’ and, after reading her journal and hearing her talk, my own expectations were also way up, which as we all know often means you’re in for a disappointment. I do sound like the eternal pessimist, don’t I? Believe me, I’m not, but we set the bar very high on what we expect to be able to give our guests (“standards” is Mrs B’s watchword).

Just three weeks before guest arrival day, I first set foot on Cambo soil. An impromptu week in St Andrews with James and the quiet dog was the perfect base for me to make the final plans, or, should I say, check where we would position the gin bar – see what I mean about setting the bar?

It was the wettest September day – all of us soaked and squelching. Little Rowan (Rachael’s boy) was the only one snug in his wellies and waterproof dungarees. We trudged up the muddiest of lanes, not a soul in sight – hardly surprising on such a day – and then we reached the brand spanking new stable block. We couldn’t have been more graciously welcomed, despite our sodden state, as we were given the tour of what, in a little under three weeks, was to become the warm hub of the Cambo Estate. 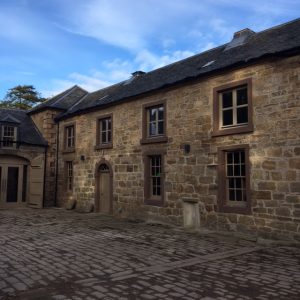 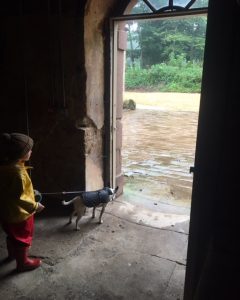 I could see Rachael mentally ticking off spaces that she, with her architect’s eye, approved of, and we both could see areas which were going to be perfect for photographing flowers. In fact, as our excitement about these trivial matters reached fever pitch when tables and props were spied, I noticed James and the dog sidling closer to a gate in a wall. “Go and look”, they all said in the stables.

I don’t think my memory is playing tricks on me when I say that through the – rather nondescript – gate in the long wall was another world. I’ll swear the rain stopped, or if it was still raining we hardly noticed (I do love that film). And they were right – all those people. I loved it. We all loved it. Rowan zoomed around, on pathways that are obviously designed for zooming. The rest of us, trance like, wandered off in all directions, reaching out to touch all the grasses, exclaiming at the exquisite colour schemes and in bewildered awe (same film 😉) at the sheer brilliance of the planting schemes in the long, wide borders, that seem to draw the eye right through to the high back wall where two bronze statues are doing cartwheels. Those statues for me sum up perfectly the feeling you get – you want to do cartwheels and zoom around at having discovered this gem. I can’t describe it any more, you must go!! 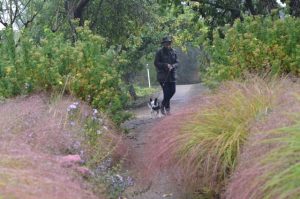 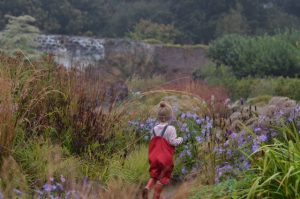 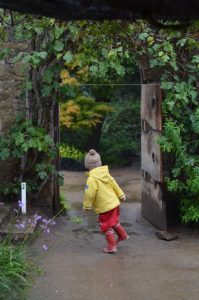 We went back again the day after, this time in sunshine, to see the sea and to check out the indoor spaces. Another favourite film is Gosford Park and when I found the grand piano I knew we had the perfect setting and, of course, a fine room in which to position the gin bar. 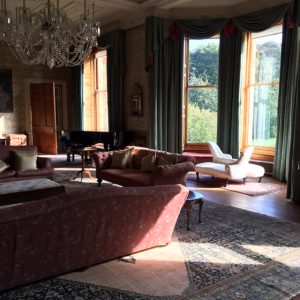 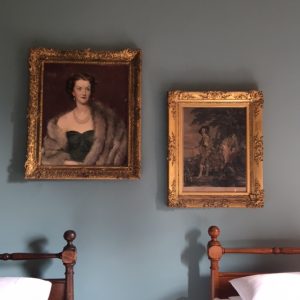 On a much sunnier day mid October, pretending we owned a country house with walled garden, we met our guests, and their partners and their dogs. The scene was set for 3 days of garden appreciation, flowerising and evening banqueting. There are so many special moments that I can’t capture adequately here, and indeed so many photos that might form the subject of another post elsewhere. I know that as we all stepped into the walled garden at 3pm on a Scottish autumn day, with Elliott Forsyth, the man who, with a talented team, has created this garden that captures your soul, a garden that every floral designer dreams of, that echoes exactly what we do when we create our designs, with structure and movement and colour and life and small moments that draw your eye through, we all felt the same thing. We had discovered paradise. 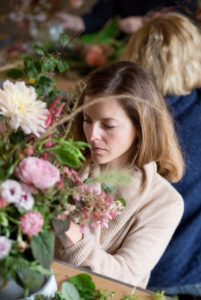 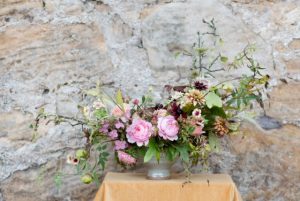 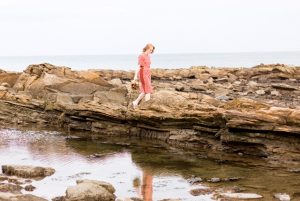 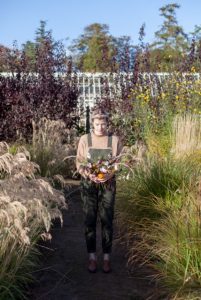 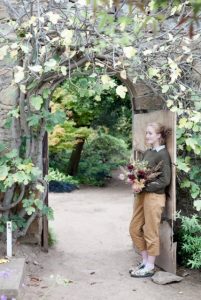 [photos above by Helen Warner Photography]

We return again this autumn. We can’t make promises on the weather, and we can only speculate on dahlia colours but we can promise some Noel Coward tunes on the grand piano, and maybe some Scottish dancing just like my two favourite films. Oh and there’ll be a gin bar ….. in case you are more Ingrid Bergman than Kristin Scott Thomas ……

If you’d like more details on reserving a place then contact another Christin: Christin Geall at www.cultivatedbychristin.com 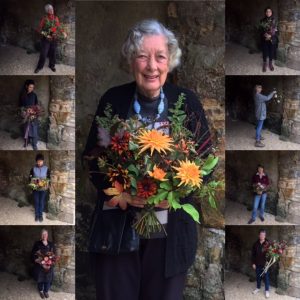 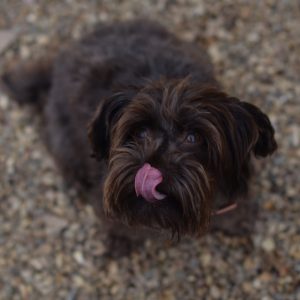