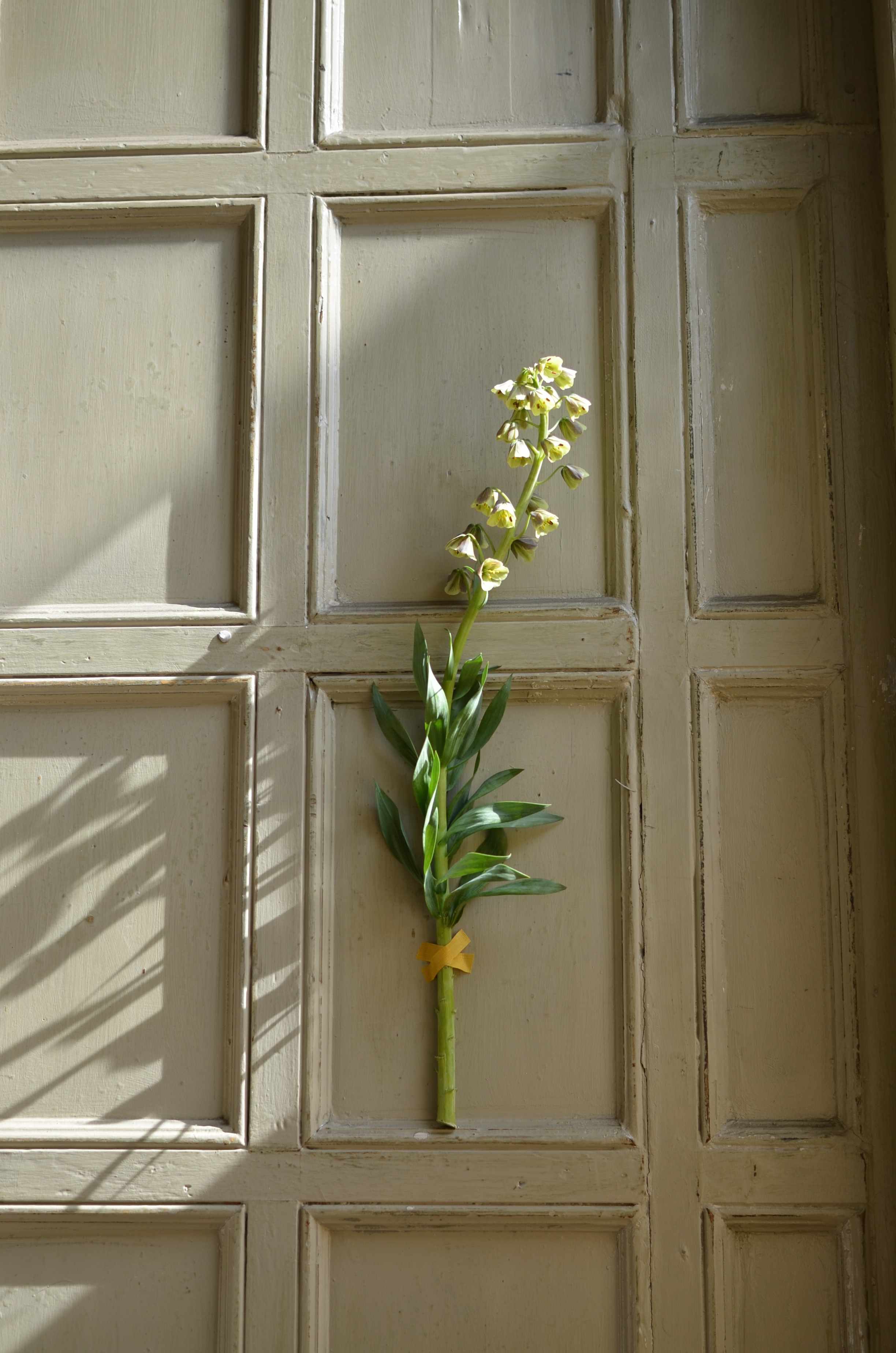 Floral workshops – Confessions of an addict 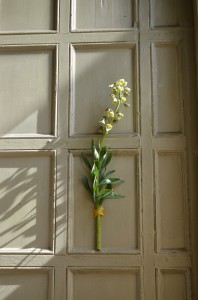 Last year I must have attended at least 8 workshops on flowers or how to grow them. This might seem odd since most of my own work is in running floral workshops. But, for me, there really is no better way to spend a day. Surrounded by the scent of flowers, flowers chosen by someone else, placed in buckets scrubbed by someone else. I like to go alone, or with a friend. I love a road trip and there is nothing better than a day of flowery chat with other like minded folk. Here’s a round up of just some of the inspirational workshops I visited last year – more to come too.

THE FLOWERS FROM THE FARM HARROGATE WEEKEND:

This was an entire weekend of flowers. I went alone, knowing no-one. I came away exhilarated (highly unusual for me mid February) and having met some truly wonderful people, some of whom I hope will remain friends for life.

The ballroom of The Majestic Hotel, Harrogate was heavy with the scent of Cornish narcissi, sweet box and winter- flowering honeysuckle. This is a weekend where British flower growers come together to learn and network, bringing with them baskets brimming over with the most unusual cut foliage, seed heads, pheasants’ feathers and just about anything that can grow in the near-freezing temperatures of a Northern winter.

Over two days there were demonstrations of floral techniques – floral crowns, wild bridal bouquets, natural funeral tributes – the kind of stuff I once paid a fortune to learn down in London. And then, in the traditional Yorkshire way, everyone ‘galvanised’ and made their own versions. The creativity was quite something to behold, but, more than that, so was the generosity of folk willing to share their precious bundles of berried ivy and hellebores and their encyclopaedic knowledge of ‘growing’.

The weekend was organised by Gill Hodgson, who is one of the leading ladies within what I call the British Flower Movement. She really is an incredible, generous, capable and inspiring woman and anyone interested in growing more British flowers really should look at the Flowers From The Farm network. I went home, dug up the lawn and grew all summer! 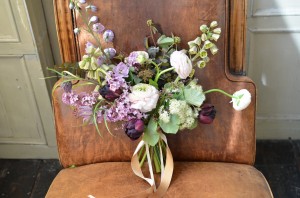 Having created a huge mound of mud in the newly-dug front garden, having read every book I could find and, of course, having listened to the wise words of the head gardener (aka my husband James) I decided that I needed a little more inspiration.

There is nowhere better to find inspiration (or a pricey but exquisite new vessel ) than at Petersham Nurseries. Over the years I have sought solace in the greenhouses there and the courses that they now hold have , in my humble and worthless opinion, taken Petershams to a whole new level.

The scene in the large greenhouse was breathtaking. Polished silver buckets of colourful spring flowers, zinc-topped tables artfully adorned with potted ferns and French glass jars – most definitely not to be confused with jam jars – of the most delicately-scented narcissi.

We spent the day with Rosie Bines and Thomas Broom avidly taking notes as they divulged the secrets of the Petersham cutting garden, which supplies the cut flowers that grace the tables of the restaurant and tea house throughout the summer. You know the garden – the one with the huge plate-sized dahlias.

I won’t spoil this day for any of you who might want to visit but, in addition to a collection of sweet peas which flowered all summer in Mrs B’s garden, I discovered a seed that is a true show stopper. Cobaea scandens ( sometimes called the cup and saucer vine). This prolific climber forms an eye-catching archway in the Petersham garden. I’m afraid in my own garden I used it in so many bouquets it never really stood a chance. 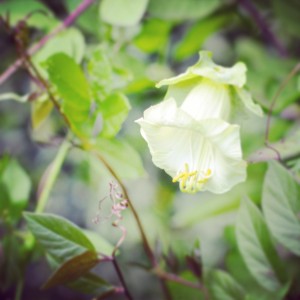 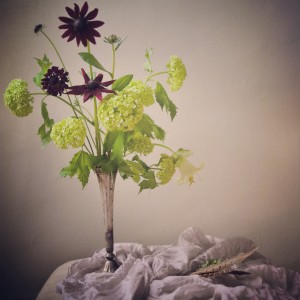 What inspiration would spring bring? One morning there was a buzz on Twitter. They were coming to London – those Little Flower School folk. I had the answer – Spring Floral Immersion!

This was the stuff of dreams. Like thousands of other flower addicts I knew the work of Nicollette Camille and Sarah Ryhanen – petal by petal. In the days after securing my place on this much sought after course I felt euphoric. Mind you, that might have been to do with the dent in my savings account!

I shall never forget those two days spent in the presence of floral greatness. I now understand that it really is possible to create art with flowers and these almost film-like American ‘gals’ are true artists in every sense of the word. The ‘set’ at The House Next Door had been carefully selected so that each and every wall and corner provided the perfect backdrop for flowers. And the flowers …. even now they make me sigh. 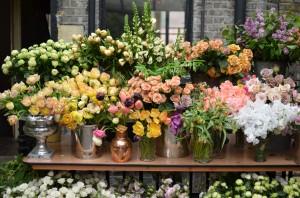 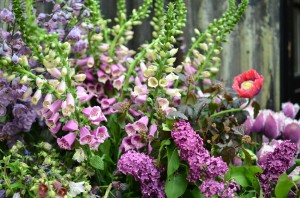 I have so many memories of that workshop- the people as well as the flowers and, of course, those things I learned just by standing in the back yard with the spring sunshine highlighting every arched flower stem as they placed them in what could easily have been a choreographed performance, since it was executed to such perfection. 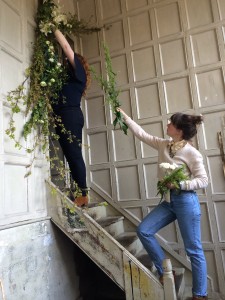 My resounding memory though is of something said by Gabriela (La Musa de las Flores); “I want to make flowers for people’s homes because beautiful flowers can transform any space”. How right she is, and how often have I said the very same thing? Ever since we stole peonies to put along the mantelpiece of our scruffy student house! And so, I shall continue with my own small quest to get flowers into homes by encouraging those who attend our floral workshops to re-fill the vessels they take away with them with whatever flowers they like – so long as they are not stolen! 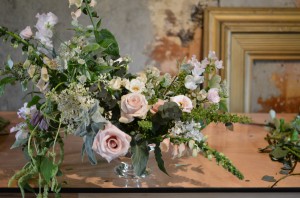